“Are retailers and brands like Decathlon, Nike and others changing the current narrative to better suit the needs of customers and their profit margins, blurring the lines between brand and retailer?”

As we enter the third year of the pandemic, many brands and retailers around the world have been making the move to sell direct-to-consumer in an effort to not only stay in business but to possibly enter new markets. Simultaneously, because of the rise in direct-to-consumer sales for brands, we have seen the rise of private labels within retailers. The waters between brands like Nike and retailers like Decathlon are potentially blending. In the last six months, these two global sporting goods companies have contended well with a fast-changing industry and many may look to follow. As global industries continue to try to keep up with the growth of e-commerce, consumer demands and behaviour, technological advancements, and more recently the pandemic, we have taken a look at how these companies and others are adjusting and performing.

In the fight to catch the consumer’s attention, retailers and brands are climbing to new heights to not only increase profits, but to stand out in the minds of consumers enough to earn their loyalty over the long term. Traditionally, an online retailer would stock a brand’s items which would then be sold to a customer who visited their store. However, the rise of e-commerce and direct-to-consumer shopping channels is making the relationship between the two, at times, a tense one. Not only is the relationship becoming fraught, consumers are starting to see brands and retailers as one in the same. This is because both of them are going the distance to offer a unique shopping experience, and both of them are offering similar - if not identical - shopping methods. If a consumer shops on ASOS.com and buys a River Island jersey, it is safe to say the customer likes and trusts both the retailer (ASOS) and the brand (River Island). But, what happens when River Island opens up their own online store? The customer can now go directly to them. In reverse, what if the customer is already aware of River Island’s online store but prefers the shopping experience on ASOS.com? Perhaps they have faster shipping or nicer packaging. At its essence, this all comes down to one question: Who owns the consumer?

Now more than ever, it is easier for brands to sell directly to consumers and, although they see the value of large retailers selling their products, most brands would ideally prefer to have the attention of the customer to themselves. Theoretically, if a brand truly wanted to start selling online overnight, they could launch a Shopify or Magento site paired with an Instagram shop and a couple of Google ads for marketing. But, like we said, this is theoretical and brands should not rush to launch a direct-to-consumer online channel without a clear retail strategy.

The shift towards D2C

Approximately 5 months ago, DSW, one of the largest shoe retailers in the US, received their last-ever shoe shipment from Nike. This is because Nike is shifting its focus and its products away from third-party retailers to their own online website, mobile app, and their brand concept stores. If you want to wear Nike, you’re going to have to shop from Nike, and this is by no accident: The sporting goods giant has been implementing this strategy since 2017 and, bit by bit, their shoes and apparel are getting harder to find in external sporting retailers around the world. So far, Nike’s Head of Finance Matthew Friend says that they have “exited 50%” of their retail partners. Aside from wanting to increase profits and connect with markets via e-commerce, Nike’s then-president Trevor Edwards stated that is about removing themselves from “mediocre retail”. From 30,000 retail partners, Nike’s plan has been to cut down those partnerships to an exclusive 40.

By doing this, Nike is able to control the shopper experience, gain new customers, cut out the costs and admin associated with the traditional B2B chain of custody, and position themselves as an exclusive brand.

As a retailer, Decathlon is developing an omnichannel purchasing experience for consumers as they focus on online sales across both direct-to-consumer and via third party online channels. In China in March 2021, they joined JD.com with their own flagship store, an e-commerce giant, which was a smart move considering online sales for all retail in China surpassed brick-and-mortar sales, accounting for 52.1% - a world first. In Switzerland, Decathlon is strategically planning to benefit from a shop-in-shop concept without the costs associated with their own department store as they shift more focus to online sales through a partnership with the Manor Group, a retail conglomerate that generates a revenue of €1.6 billion. The benefits of the shop-in-shop concept are obvious, but more importantly will retain some brand awareness and exposure.

Despite the line between retailers and brands becoming thinner and weaker, retailers are not going down without a fight. To contend with brands becoming more autonomous, retailers are launching their own in-house private label products, essentially becoming a brand in itself. From clothing to sporting goods; from shoes to electronics; retailers are creating high-quality private labels which is increasing customer loyalty. According to a McKinsey & Company study, during the Covid-19 crisis, 38% of consumers tried a new private label brand and the most common reasons were affordability and availability. In addition, 40% of the same tested group said they’d continue with a private label after the pandemic subdues for the same reasons. In 2017, Decathlon began making plans to have their entire product range owned and manufactured by them by 2020, however, with the surprise of the Covid-19 crisis, this plan has slowed. Former spokeswoman for Decathlon Germany Genevieve Mulack said that “we will develop all our products ourselves in the future.” Today, Decathlon owns close to 70 brands stocked in their stores, ranging from cricket to mountaineering to basketball to yoga and everything in between.

How would this move affect their pricing and overall performance?

It may be too soon to tell, however if we look at Decathlon’s sales in China from 2013 - 2020, a period in which a direct-to-consumer online presence certainly increased for many global brands, we may be able to make a fair prediction that Decathlon’s sales should not be affected as long as distribution and manufacturing can keep up with global demand. In 2013, Decathlon in China made €7.4 billion, which rose to €12.4 billion at the end of 2019 (2020 saw Chinese sales drop to €11.4 billion because of the pandemic). 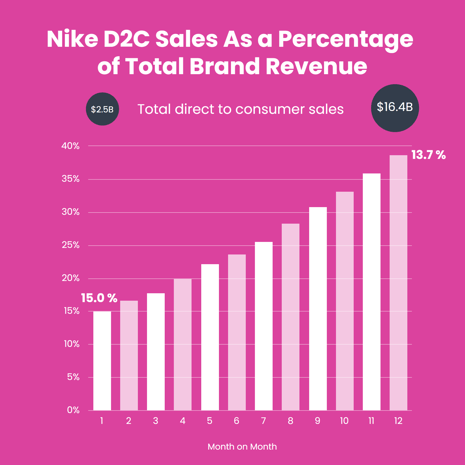 With Decathlon and Nike owning and controlling their brand, this eliminates some of the competitive antics involved in pricing strategies with product resellers, allowing them to control their retail prices more competitively.

By the end of 2020, global e-commerce spend increased from 4 to 18% since 2010, totalling €3.7 trillion. Moreover, if we take a look at the last decade of retail, we can see a number of advances that have caused a ripple effect over the years:

In an ever-changing industry, an omnichannel or direct-to-consumer business model for brands is proving to be a good move. Other than the above-listed reasons, why else should brands consider moving to a direct digital channel? Another reason for developing one's own e-commerce platform or app is to become more pricing-focused, thus increasing your profit. Another reason is creating a brand narrative which can be done more effectively than ever before - and that is just the start.

In 2021, the global consumer electronics industry generated €655 million in revenue, which is expected to grow to €839 million by 2025, depending on the supply-and-demand on semiconductors. That’s an annual growth rate of 7.2%. In India, the rise of D2C consumer electronics brands in the face of global giants like Apple, Samsung and Xiaomi has not whimpered. Brands like BoAt, Portronics, LoopAudio and Noise manufacturer, market and sell their products, which include headphones, Bluetooth earphones, smartphone covers, portable speakers, travel chargers and more. Similarly to Decathlon and Nike, BoAt has a hybrid D2C/B2B business model with shopping experiences available through their own web store, brick-and-mortar retail brand stores, Amazon and Flipkart. Out of all the above-mentioned sales made in the consumer electronics segment in 2021, 43% were completed online, which is up from 37% in 2019.

US bike manufacturer Specialized recently made strategic changes to its business model. From February 2022, shoppers can order their pre-assembled bike on their website and have it delivered directly to their homes. Up until now, however, local bike dealers played the middleman by assembling the bike for the customer and delivering it to their home or, if the customer lived close by, they would collect it. By offering this service to Specialized, these bike dealers received a cut of the profit from each sale. Now that customers have the option of ordering pre-assembled bikes for home delivery, local bike shops will be receiving up to 50% less of their usual margin, and in some cases, not at all if customers continue to choose the pre-assembled home delivery option.

Before officially announcing this change, founder Mike Sinyard said in April 2020 already that changes to Specialized’s business model were going to drastically change due to evolving consumer buying habits: “There is no escaping the reality that these changes will be disruptive for a while.” However, this was not Sinyard’s original sentiment roughly a decade ago when he boldly stated at a bike dealer event that Specialized would never sell bikes over the internet, in a bid to show loyalty to the bike retailer community the company has built since its 1974 inception. Fast forward back to April 2020, Sinyard said “Click-and-collect is a game-changer now. We see that as the best model working forward with our retailers.” This just shows the mental and physical shift companies have had to make in just a matter of years. In addition, now that Specialized has a stronger D2C element, they are reserving 15% of their stock just for D2C sales, thus making themselves a direct competitor to the very bike retailers they’ve been working with for years.

What is the future for retailers and brands?

Whether businesses like it or not, e-commerce is changing the retail landscape. In fact, the 2021 report by E-Commerce Europe stated that 73% of all citizens living in the EU-27 group shopped online in 2021 - that’s three-quarters of an entire continent. In addition, this number was up from 68% in 2019, showing a growing trend in shopping online. When online stores for brands were first emerging a decade or so ago, it was primarily used as a supportive entity to the primary department store, typically in a mall. Now, online stores and social media stores are built, managed, marketed and treated as individualistic, important parts of the selling machine - as they should be.

With online sales being made more of a priority for companies, there are many opportunities to see businesses flourish and to connect with consumers in a more authentic way. Barclay’s estimates that the UK could make an additional €15.9 billion in revenue over a 5-year period using more direct-to-consumer strategies, and this could result in over 31,000 new jobs being created.

Omnia certainly expects a trend in the coming years where more and more originally-focused B2B and online-oriented brands will enter the direct-to-consumer arena with some introducing flagship, shop-in-shop, concept brick-and-mortar stores or brand-owned online stores. We know that establishing a presence online seems on the outset to be an easy task at first glance, and it certainly has become more accessible to do so, but we also understand how competitive the market is in terms of advertising, dynamic pricing and logistics. Ultimately, this is where technology will eventually decide who remains on top and who flounders.

An awarded strategic marketing and business professional who has assisted in leading businesses through developing and implementing strategic insights and campaigns across marketing, strategy, and business development for over 15 years across an international landscape in retail, SaaS and financial sectors.