In the beginning of 2020, we at Omnia believed the news story of the year would be the arrival of Amazon NL.

We couldn’t have been more wrong about the biggest story of the year, but that doesn’t mean that Amazon NL isn’t an important player we should ignore or forget about.

Three months after Amazon NL’s debut, what has happened to the market? We did a short analysis to see how Amazon compares against other major Dutch retailers and what that means for its market position.

In a monthly report we receive, Omnia’s CEO Sander Roose noticed that Amazon NL was dominating the out-click shares from a major local comparison shopping engine in May and June. In fact, the number of out-clicks was double the out-click share of the second retailer, bol.com.

Amazon’s pricing strategy is notoriously dynamic. The company is well-known for extremely frequent price changes and an ethos of providing the best customer experience in the world — which often coincides with rock-bottom prices.

We were curious what was driving this high number of out-clicks. So, we did what we do best  — dove into the data to see what was happening in the market. We used the top 2000 products on Amazon as a baseline, then looked at a couple of key factors in comparison to the rest of the market.

The first thing our consultant analyzed was the frequency of price changes on Amazon.nl, and what he found was not altogether surprising. Amazon’s top sellers change prices frequently — in line with Amazon’s pricing strategy. 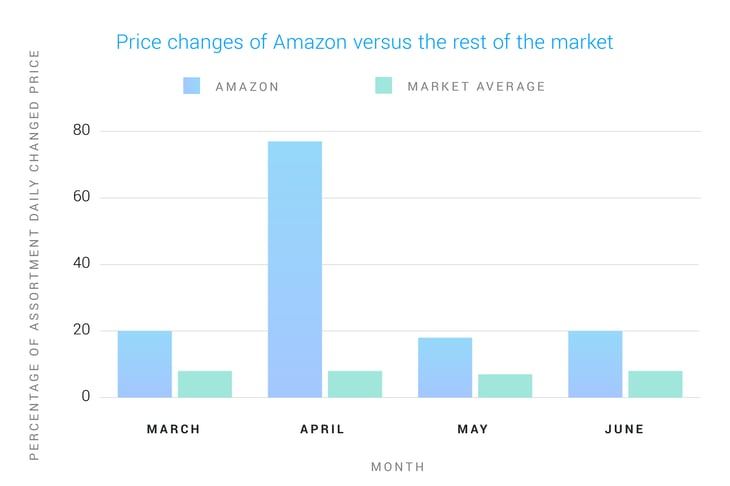 However, what’s particularly interesting to look at is the month of April, where 77% of the products in the sample of Amazon’s assortment experienced a daily price change.

There are two likely contributing factors to this. The first is that April was the first full month that Amazon was a full webshop in the Netherlands, and the company had likely set a more aggressive pricing strategy during this time.

It’s impossible to say for certain though that the company’s strategy was the reason behind this increased frequency of price changes. April was also the first month of a strict lockdown against the coronavirus in the Netherlands, which drove a huge increase in e-commerce.

Lowest price on the market

Amazon NL doesn’t only change its prices more frequently than other Dutch online retailers. It also has the lowest price consistently, according to our data.

At Omnia, one of the metrics we look at when evaluating price position on the market is called price ratio. It’s a measurement of how the price of a product varies from one seller to the next.

Say, for example, you sell headphones online for €90, but your competitor sells the same headphones for €100. While you know that you have the better price, it may be useful to know how much better your price is.

That’s where the price ratio comes in: it shows the relationship between two prices. To calculate price ratio in the above example, all you need to do is divide 90 by 100, giving you a price ratio of 0.90.

In other words, as long as your price ratio is below 1.0, your products will be cheaper than the competitor you’re comparing yourself to.

We took this calculation and applied it to Amazon’s top 2000 products, as seen in the graphic below. We compared the price for these products to the market average price of other relevant retailers in the Netherlands. This average market price was calculated as the average price of several of the largest retailers and e-commerce stores in the Netherlands, including Bol, MediaMarkt, Coolblue, BCC, and others. 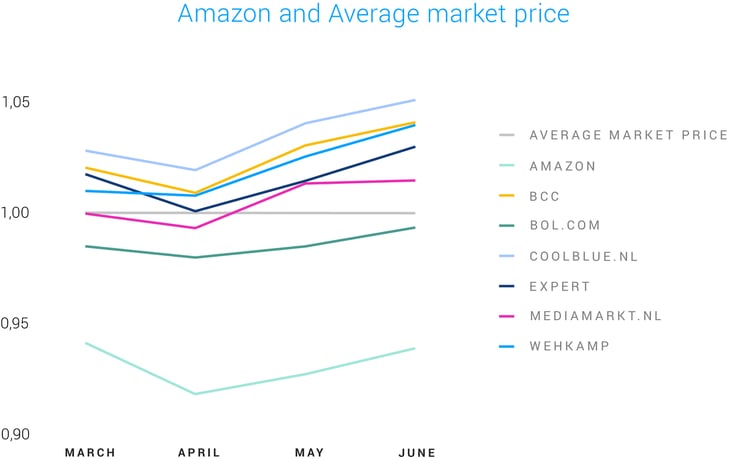 What we found wasn’t altogether shocking: Amazon has a lower price ratio, ranging from 0.92-0.94 across the last few months.This means that Amazon’s product prices were, on average, 6%-8% lower than the market average price.

What does this mean for Dutch retailers?

When Amazon made its debut in the Netherlands, we made a couple of predictions:

Our data shows that the first two predictions have come true. Amazon is, on average, the lowest price on the market, and the number of price changes every day has skyrocketed.

There’s also good reason to believe that Amazon’s Prime initiative is also working. Even though Amazon doesn’t publicly disclose the number of Prime members, Emerce reported that Amazon Prime Video had one million viewers in the Netherlands in April.

The data also shows that Amazon is sticking to its localization strategy. The company is keeping prices close enough to Dutch retailers to be seen as the cheaper alternative to the existing e-commerce space, but isn’t going for rock-bottom prices or trying to match its German webshop prices. Instead, Amazon appears to be hovering just below other Dutch retailers.

“Amazon is not holding back when it comes to its pricing, and I wouldn’t be surprised if they’ve already passed two million Prime members,” commented Sander Roose, CEO of Omnia Retail. “Now, more than ever, Dutch retailers and brands need to adopt technology to help them follow market prices.”

The reality is that Amazon will always price lower than you, so resist the urge to drop your prices further. Amazon will simply follow the market, and you could trigger a race to the bottom.

We're happy you're interested in our Price Points newsletter.
If you leave your details below, you will receive our bi-weekly pricing insights and fresh retail industry news without commercial spam!