After launching amazon.nl with an assortment of Dutch Kindle e-books by the end of 2014, Amazon recently made a second step in entering the Dutch market. Last week it added the Dutch language to their German website, amazon.de. While parts of the website have not yet been translated and there is no iDeal payment option yet, this is a clear sign that Amazon is starting to focus more on the Dutch market. It is becoming clear from comments on articles in the trade press about this move by Amazon that opinions vary wildly as to what this impact will be on pricing of products in the Netherlands. Some claim that “all margins will shrink to zero”, while others claim that Amazon is not priced aggressively at all.

What does the data show?

Of course, Omnia has access to pricing data of amazon.de. Amazon.de advertises on a major Dutch comparison site, so it is included in the Dutch Omnia Pricewatch data. However, this mainly covers electronics. It is also possible to source pricing data from all major German comparison shopping engines via Omnia's Pricewatch Module. This will expand insights into Amazon pricing in categories beyond electronics. For this analysis we looked at a large set of electronics products, found on amazon.de and 5 large Dutch electronic retailers,  bcc.nl, bol.com, coolblue.nl, mediamarkt.nl and wehkamp.nl - all 6 of which were advertising on this major Dutch comparison shopping engine. 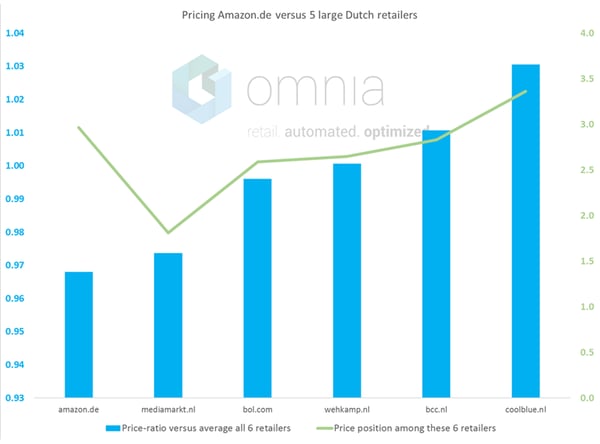 Looking at price ratio, amazon.de indeed has the lowest prices. However, the difference compared to mediamarkt.nl is small. Looking at price position, is seems that amazon.de is not pricing efficiently, because - although it has the lowest price ratio -  its price position is one of the worst. This seems counterintuitive, as Amazon is known as one of the most advanced retailers in terms of dynamic pricing capability. The logical explanation for this is that Amazon does not have localized pricing for the Netherlands. The amazon.de pricing advertised in the Netherlands are simply their German price points and these price points are fully based on the German market.

Omnia is a supplier of competitor pricing data and software to automate your pricing strategy in the most optimal way. Of course, Omnia is a software supplier and the choice of pricing strategy is always up to the retailer. Below are some suggestions in terms of pricing data and the use of Omnia software, considering the increased focus of the world’s number 1 retailer on the Dutch market.

1. It all starts with data.

To decide about competitive pricing compared to amazon.de, it is crucial that you have access to amazon.de’s pricing data. With regards to electronics assortment, the pricing data of the Dutch comparison shopping engines will probably suffice. If you need data coverage on products outside of electronics, then you will need data of major German comparison shopping engines and/or data from the German Amazon Marketplace itself. If you’re interested in this, please contact Omnia.

2. Determine the impact of amazon.de on your product categories.

The lack of iDeal payment option, and the longer delivery times make Amazon’s offers less attractive in the Netherlands. However, if the price differential is sufficient we see that many Dutch consumers will choose amazon.de over its higher priced Dutch competitors. The click-out reports of major Dutch comparison shopping engines may provide an indication of the impact of amazon.de on your product categories.

3. Determine whether you want to adjust according to amazon.de pricing.

The answer on the previous point should, of course, be an important input to this decision. If you don’t want Omnia’s core algorithm to adjust to amazon.de, you can set the competitor weight to zero.

Based on the dynamics of your business this protection can be set at zero percent, or at some percentage above or below zero. This has always been our advice, but considering a retailer is now offering goods at a 50% discount versus key retailers in the market, this has become much more important.

Sander Roose isn't just a business Founder and CEO - he's a proud father of two, a sports enthusiast, and a serial entrepreneur. He holds an MSc degree in Industrial Engineering & Management Science from the Eindhoven University of Technology, where he graduated cum laude. With two decades of retail and eCommerce experience, working on the retail side of Procter & Gamble, to specialising in retail strategy consulting at Harvest and Commerce Squared. Sander loves puzzling through retail’s most significant pricing and market challenges by combining strategy, AI and technology. As CEO, he sets the course for Omnia and guides the company through strategic changes and growth.