The much-anticipated moment certainly brings a new era to Dutch e-commerce. But unlike many other markets Amazon has entered, the Netherlands already has a highly-developed e-commerce sector. Amazon doesn’t have the first move advantage in our country, and this makes a huge difference on its impact on the market.

We were curious about how Amazon’s debut would influence the market, so we did what we do best: crunched some numbers.

Amazon’s early influence on the Dutch market: what happened on Day One?

Day One is an Amazon philosophy that founder Jeff Bezos pushes relentlessly.

The idea is that in order to succeed, Amazon can never stagnate. He stresses that everyone in the company should maintain a “Day One” mentality — a mindset that’s customer obsessed, agile, inventive, and innovative.

So what happened on Day One of Amazon's launch in the Netherlands?

On Amazon’s first day in the Netherlands, we analyzed the top 10,000 products in the electronics category (according to popularity). We evaluated how many were present in Amazon’s product offering and the top four Dutch retailers in this category. The retailers we analyzed (aside from Amazon) were:

We were also curious about how Amazon.nl differed from Amazon.de, which had previously been available to Dutch consumers.

To evaluate this, we took a snapshot of the Dutch market on March 9th, 2020 (the day before Amazon.nl’s launch). We refer to this throughout this piece as Day Zero, and used it as a baseline for what happened in the Dutch market the day Amazon launched Amazon.nl (which we refer to as “Day One”).

In the end, we looked at all this data through three major lenses that echo Amazon’s proposition:

Number of EANs offered: Day Zero vs. Day One

This data tells a clear story. While Amazon.de had great coverage of products on Day Zero, the Dutch market was able to fight this giant marketplace. In fact, Bol had significantly more product coverage than Amazon.de.

But how does that compare to Day One of Amazon.nl?


This number is not surprising, and Amazon NL even stated that it takes time to build an assortment. This number is likely to rise as more Dutch companies begin to sell on the platform.

According to Simon Kucher & Partners, 44% of Dutch consumers will only buy from Amazon if the price is 10% lower (or more) than their favorite local hero.

If Amazon can make market prices more attractive (which it most likely can) consumers will understandably use the platform.

We wanted to know if Amazon could reach that 10% mark, and wondered how Amazon.nl’s prices compared to Amazon.de’s.

On Day Zero, and on the products that Amazon.de offered that Dutch retailers also offered, Amazon.de had a lower price for a whopping 73% of the overlapping EANs (3,645 of the shared 4,942 EANs).

In some cases, Amazon and another company may have offered the same price on a product, and that price was the lowest on the market. In this situation, this EAN was separated into its own category: “Number of EANs where NL retailer and Amazon.de offer the same price”. This only occurred on 2% of EANs that the companies shared (108 EANs in total), which is likely the result of a localized pricing strategy.

After looking at the Day Zero data, we compared this to what happened on Day One with the launch of Amazon.nl.


Again, the overall numbers were lower, and so were the percentages.

It is worth noting though that, at least for Bol.com, the price difference wasn’t that large. Our analysis showed that Amazon’s products were only 3% lower on average than Bol’s prices.

The close proximity of price is only one piece of evidence that shows Amazon is clearly taking a localized pricing strategy.

Even more evidence? Take a look at the screenshot below. You can see there is a large price difference for the same product on Amazon.de and Amazon.nl. 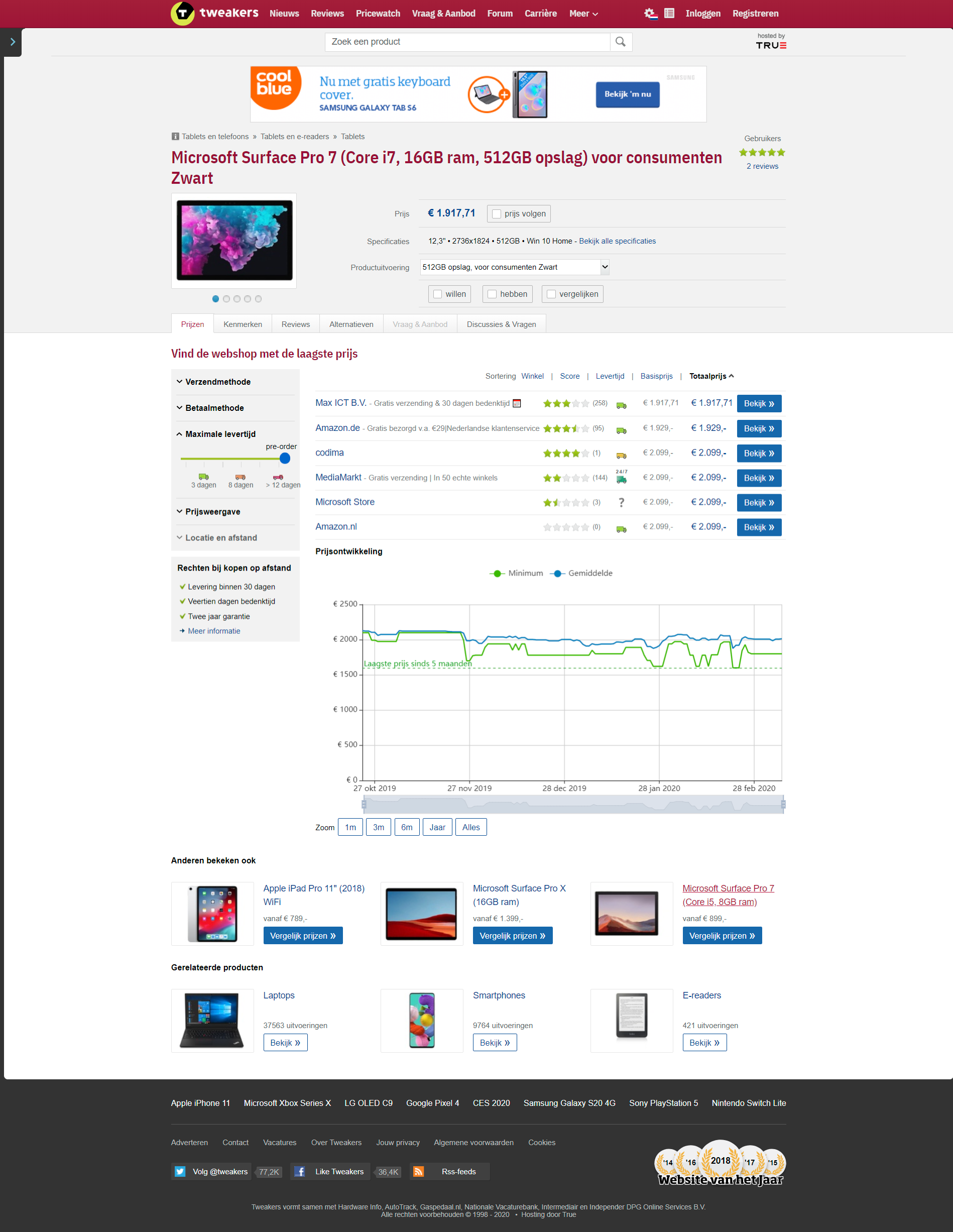 Overall, Amazon is pricing itself much more aggressively in the German market, and prices in Germany are roughly 7% lower than the Amazon.nl store.

Lowest price on the market

After establishing how prices compared across retailers, we wanted to know who offered the lowest price on the market for products.

Day Zero: Amazon has lowest price on 42% of products

On Day Zero, of the 10,000 popular products we analyzed, either Amazon or one of the top four Dutch retailers carried 8,931 of these products.

For 7,809 products, at least two retailers offered the same EANs in their stores, meaning there was inherent competition on price.

For 1,122 products though, only one retailer offered that EAN in their store, making that store the lowest price by default.

However, what’s more interesting is the percentage of each store’s offers that were the lowest.

For Day One, 6,295 products had inherent price competition. Again though, it’s more interesting to compare what percentage of each shop’s assortment was actually the lowest price on the market.

In this second data set, both Bol and Mediamarkt’s numbers look much higher, but this is influenced by the elimination of Amazon.de data on the Day One analysis.

There were several indications of Amazon’s strategy on Day One. The most notable is Amazon Prime.

Amazon Prime is, in many ways, the key to Amazon’s strategic success. The project was so important that Jeff Bezos pulled team members from other high-value projects during the busiest time of the year back in the Winter of 2004. In fact, it was so important that Bezos announced it at a Saturday morning meeting in his boat house with the starting team — it couldn’t even wait until Monday.

Prime was a gamble, and many in Amazon didn’t see how the economics of Prime could work, but Bezos pushed forward with the initiative. And it paid off. According to a recent survey by Consumer Intelligence Research Partners (CIRP), more than 100 million people in the United States have an Amazon Prime account, and Prime members spend double the amount of non-Prime members — an average of $1,400 per year.

Prime is Amazon’s most lethal weapon, and the company seems to be luring Dutch customers in with the service from the start. Dutch customers can try Prime for free for 30 days. After that it only costs €2.99 per month. In most markets, Amazon costs somewhere in the range of €8 per month.

Amazon also seemed to pick fast-movers for deep promotions. This is called the high-runner strategy, and is in line with what Amazon has done in the past.

We saw this on several products today, including some Sony headphones, which are the number one selling electronics product on the Dutch market.

The truth is that we expected this. What was far more fascinating today was the market reaction to these changes. Bol.com, for example, also dropped its price on those same headphones.

How Dutch retailers can react

While consumers may stay loyal, Amazon will change the Dutch market significantly. It’s our expectation that local players (like Bol, Coolblue, and Mediamarkt) will interact with this new player. Bol.com’s fast response on the Sony Headphones will become the new norm.

To start, you can expect the market to become more dynamic and competitive.

Pricing is incredibly important to Amazon. The company uses a high-runner strategy, so it adjusts prices to appear more attractive to consumers. With this strategy, Amazon prices aggressively on highly-elastic items to draw traffic to the site. Once on the site, Amazon will sell these elastic products at a discount, but will often bundle them with other products that are less-elastic and sell at the full price.

This strategy is advantageous in that Amazon makes profit on the non-elastic items. But it also helps solidify Amazon’s price perception as the e-commerce outlet with the lowest prices on the market.

The high runner strategy comes with a high frequency of price changes. To keep up, retailers and brands need to invest in their ability to update prices at a similar rate. Bol has already proven itself capable of responding to Amazon’s price changes and strategy by dropping prices on high-runner items.

If you can’t beat them, join them

If you don’t want to compete against Amazon, another option is to use the marketplace to your advantage. Amazon is a great channel that draws tons of consumers, so it might be an interesting place to sell your products.

Key lessons for selling on Amazon

If you want to sell successfully on Amazon, you need to think about how you can make the customer’s life better while also serving your business goals. As some parting advice, here are some steps to help you get into that mindset.

Your commercial objective is an explanation of why your company exists and what your overarching goals are for the company.

Your commercial objective extends beyond your products, and touches every single area of your organization, from your hiring all the way to your pricing. It’s similar to a company’s mission statement and is something you should consider carefully to set yourself apart from the competition.

To define your commercial objective you need to analyze the market, think about your goals, and design a plan to achieve those goals across your entire organization.

How can you achieve your goals while also giving customers the best experience possible? Discovering the right balance for your company is the recipe for Amazon success.

The commercial objective only works well if you can make it actionable. After deciding what you want to do, you need to consider how you’re going to do it.

3. Think from the consumer’s perspective

Amazon is, first and foremost, a company that’s obsessed with the consumer. You should do everything in your power to give consumers an above-average experience.

4. Use tools to keep your products aligned with your strategy

Tools can make or break your experience on Amazon, especially if you want to sell a high volume of items. Consider competitor intelligence tools to track product prices and repricing tools to keep your prices up to date.

Tools can also be consultancy; if you’re an individual seller it might not make sense to hire an Amazon consultant, but if you’re a larger company that wants to learn more, it might be worth investing in consulting help.

Amazon’s launch in the Netherlands was not as grand as we expected, but that may be a strategic move. Day One demonstrated that Amazon.nl does have the power to influence the market, but also that Dutch retailers can fight back with the right technology.


We’ll keep monitoring what happens with Amazon over the next few weeks and provide regular updates on how the Dutch e-commerce market changes, and provide more commentary as we go