On October 24th, 2019, we held our second edition of Omnia REINVENT at the Volkshotel in Amsterdam.

The day was inspiring, to say the least, and packed with information and insights about the current state of the retail industry, as well as where it’s going in the future. The speaker lineup was first class, with main stage lectures from

While there were many lessons learned throughout the day, in this post we’ll sum up a few of the biggest takeaways.

Sander Roose, CEO of Omnia, announced some exciting news from Omnia. As a company, we’ve sat on a treasure trove of 7 years of pricing information, and we’ve finally reached a point where we can access that data and uncover new retail trends.

One of the trends that Sander highlighted was the sheer speed at which the top players are moving. The “winners” in retail change their product prices frequently and across their entire assortments. 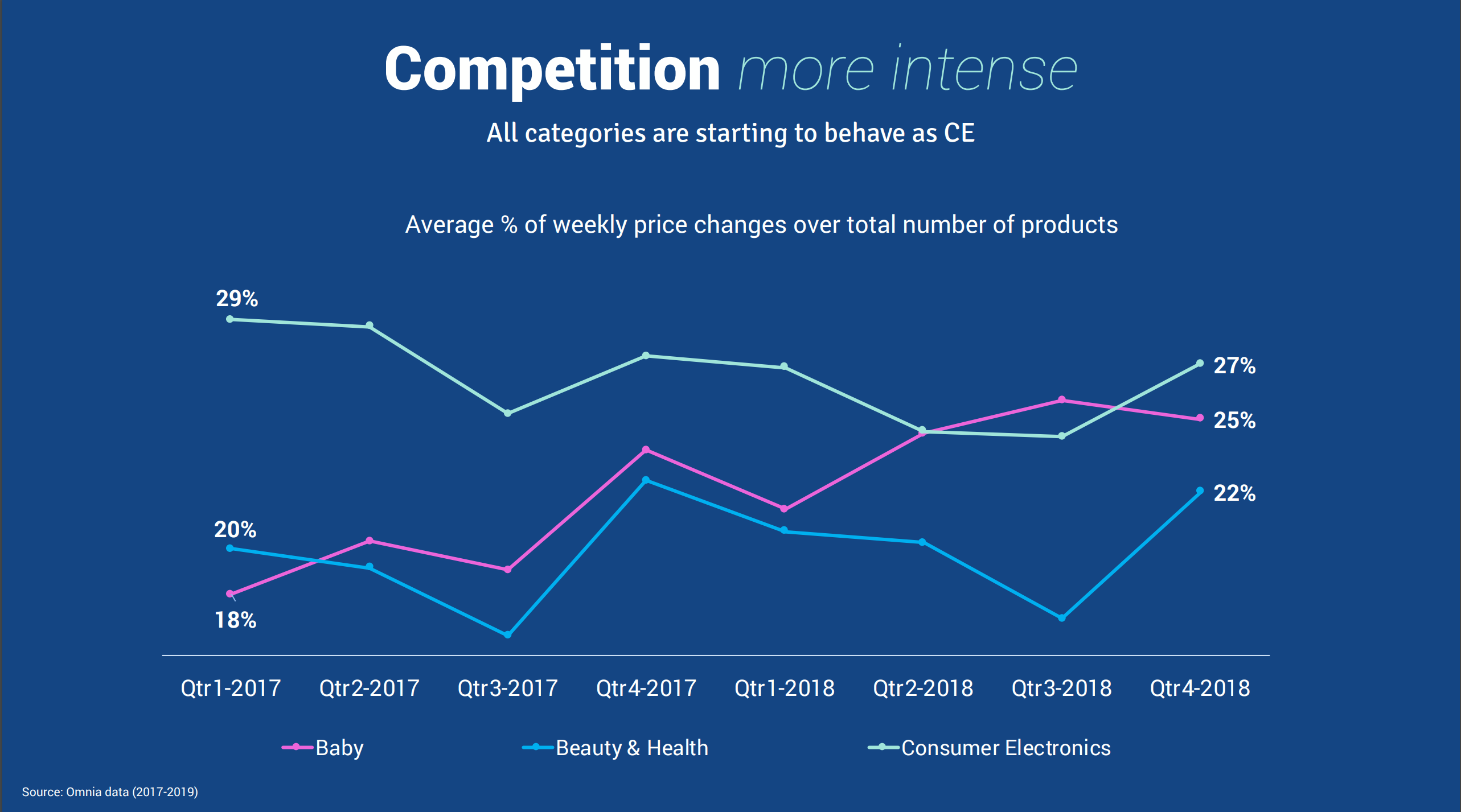 This has long been the case for the consumer electronics category, but other categories are catching up. The baby category, for example, only changed prices weekly on 18% of products in Q1 2017. That number has since grown to a whopping 25% of the assortment.

The beauty and health category also shows an upward trend since Q1 2017, but has been slower to accelerate than the baby category.

Take a look at the following slide. At first glance, both winners and all other competitors in the market appear to have the same distribution in price ratio. This measurement is across all products within an assortment. 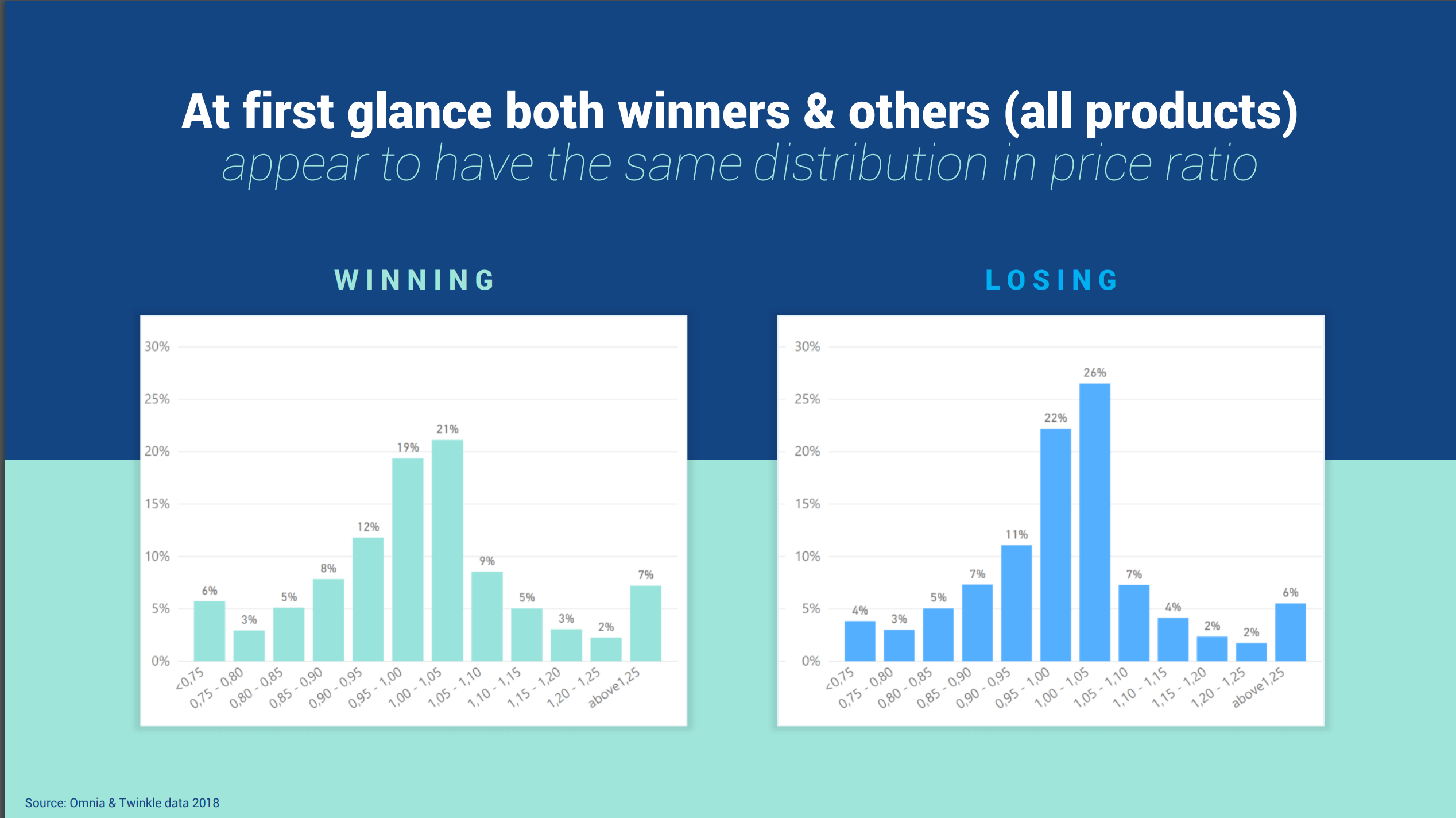 But these graphs are deceiving. When you drill down further, you find that the winners actually drive profit on products with a lower price point (less than €20).

The same winners are then extra aggressive on products that are more than €300.

“Whatever you do, do it now”

Sander’s data was powerful, and the sentiment was echoed by Piet Coelewij when he said, “Whatever you do, do it now. Move fast before it’s too late.”

2. The big guys “are going bricks”

Piet Coelewij, our mainstage keynote speaker, believes that retail is in the fourth phase of innovation: as he so aptly put it, “The big guys are going ‘bricks.’”

This is no surprise. If you work in retail or e-commerce, you’ve known about “omnichannel” for the last few years. And when Amazon purchased Whole Foods grocery stores back in 2017 for USD $13.7 billion, there was widespread curiosity about how the online retailer would use a grocery chain to sell more. Now, this practice is commonplace. Amazon has even opened its own standalone stores in several areas of the United States.

The retail giants capitalize on these stores in unexpected ways. These stores are not just another point-of-sale for customers, nor are they simply a pick-up point for pre-ordered packages.

Rather, these stores allow Amazon another way to interact with consumers and build a brand reputation - and gather data about their target market while they’re at it.

Amazon — and other large global retailers — are following the same logic that many of the world’s largest brands are following: the most competitive advantage lies with the company who has the closest direct connection to consumers...and who can act on the data they gather from those consumers.

The increased number of pure players who are adopting omnichannel strategies to gather more consumer data illustrates the third lesson from REINVENT perfectly: big data is the most valuable asset to retail.

One of the recurring themes at REINVENT this year was the power of data, which was a core topic for almost every presentation. This is for a good reason: there are now more ways than imaginable to collect consumer data, and that data is what sets the winners and the losers apart.

Why? Because that data unlocks the consumer market in new ways. When you know who your consumers are in all areas of their lives, you can create better strategies to sell products to the relevant target audience.

The need for data is so pervasive that it’s sparked the biggest brands in the world to open up direct connections with consumers. The brand-to-consumer channel is growing rapidly and shows no signs of slowing down.

There is a plethora of data that can be an asset to your business. Some metrics to consider include:

This list is by no means exhaustive, but it shows just how far data can go in your company.

4. The experts hate the word “omnichannel”

Both Piet and Nicolas agreed - they hate the word “omnichannel,” but continue to use it because everyone understands it.

Both experts argued the term simply didn’t cover what they expect the future of retail to look like. At its core, the word “omnichannel” facilitates the idea that there will still be separate retail “channels” in the future.

Nicolas and Piet imagine a retail future where user experience is seamless and there is virtually no distinction between on- and offline experiences. Instead, the two domains will combine into one holistic store that consumers can access at all times.

Nicolas mentioned the Nike+ SNKRS app as a shining example. The app effectively moves the buying experience for Nike beyond the walls of its brick-and-mortar store, merging the on- and offline worlds into one singular experience.

Nicolas mentioned a promotion where runners could go to Central Park, run around the park three times and record the run in their Nike app, then get the chance to buy a certain type of Nike shoe after completing the challenge.

Nike has been doing this already for a few years. In 2017, Nike held an event in Washington Square Park in New York that drew a sizable crowd, with each attendee holding their smartphone at the ready. As reported by Mashable:

The company has joined the growing world of sneaker apps that use tech to sell shoes in an unconventional way (Adidas and Foot Locker both have experimented with apps, to varying degrees of success). On this day, it was a pair of limited PSNY x Air Jordan 12s, dressed in a wheat brown color from top to sole. About a week earlier, Nike had teased the release of the shoe and alerted patrons that they’d only be available through its new Nike+ SNKRS app in a specific location at a specific time of day. There was no other way to get it. You had to either be in one of three designated locations when the shoe dropped or you were out of luck.

The tactic works well, and drives engagement with consumers in an exciting, fresh way. Not only does Nike sell a limited type of shoe to avid fans, but the company generates great press with it and gathers unique insights about its target base in the process.

REINVENT 2019 was packed to the brim with insightful, data-driven information, and one blog post can’t begin to cover all the insights. Retail is at a critical junction as it heads into the fourth wave of innovation, and it’s an exciting time to see where the market goes.

If you’d like to see the presentations from each of the speakers, feel free to view PDFs of each slide on this page. We’ll also cover each topic more thoroughly in the coming months.

Curious to see what REINVENT was like? Check out the aftermovie below.